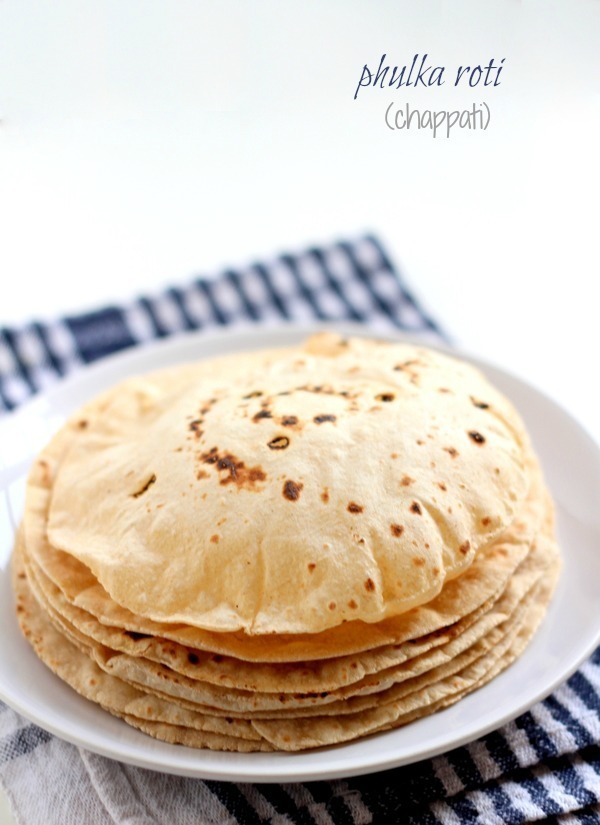 Phulka roti recipe with step by step pictures and tips – Like most of the Indian ladies, I make phulka’s everyday. Being bought up in a Gujarati family, phulka is part of our staple diet. They are made for lunch everyday and served with any vegetable curry or lentil/dal recipes. Phulka roti is also known as “rotli” in Gujarati. Rotli and roti are similar. Gujarati phulka roti are smaller in diameter and quite thin too. My mom make much thiner phulkas compared to me. Over the period she has gain the knowledge of making perfect soft phulka rotis. No matter how the dough is she manage to make perfect rotis.

I have learned how to make phulka roti from my mum. Everyday she used to take my class in kitchen carefully checking all my rotis and giving me tips. I guess making perfect phulka roti is just a matter of expierence. Once you practice enough, your rotis will start coming out perfect round and soft. The earlier you get trained the better you become. I started making phulka rotis since my schooling days. So I guess I have got enough hours of practice now.

Do not worry if you are starting for first time. There are many factors that might go wrong and spoil your first batch. Do not get disappointed. Practice well and soon your roti will change its shape from map of australia to a perfect pi*r*square 😀 I have written few tips for beginners to make soft phulka rotis. Do check those tips.

Sometimes I make extra phulka rotis in the afternoon and in evening use the left over rotis to make a tasty gujrati tea time snack called “vaghareli roti” or roti chivda. Left over roti can be used in making any different dishes. Phulka rotis should be consume on the same day or very next. The wheat flour being used in making phulka roti plays atmost role in determining the texture and softness of roti. So one needs to be careful while choosing wheat flour for roti.

How to choose/buy wheat flour for phulka roti

In India a lot of people buy whole wheat grains from market and make wheat flour at home or at small mills available in neighborhood. This flour is perfect for making phulka roti as it is grinded specially for that purpose. But if you are one who buy readymade wheat flour then no problem. Go for the well known indian brands like “Ashirwad” or “Pillsburry”. The roti made from these store bought flour also comes out soft and flaky.

I have carefully curated few tips that I feel every beginner should know while making soft phulka roti. I learned these from my little expirence of making roti and a lot of teachings from my mum 🙂 I hope these tips are helpful. Few tips to store phulka rotis so that they remain soft

Coming back to the basic recipe of making phula roti at home, let’s check step by step recipe. While adding little water at time to the flour start kneading the dough. Using your hand mix the water and flour and knead the dough. Once the roti dough is almost done, make a hole in center and pour oil and knead again.

After kneading the dough let the dough to rest for about 10 min. By giving sufficient amount of time to rest the gluten in the dough make it softer. After resting the dough for 10 min kneed the dough again so that dough becomes soft. Place the dough on rolling board. Dust it lightly with some wheat flour and start rolling the phulka roti. Roll the phulka to around 3-4 inch in diameter. Now roll again and try to make the phulka as round as possible. The trick is to roll the edges while giving it round shape. A little practice would help to make perfect round phulka roti. Roll the phulka roti to round disc of around 5-6 inch diameter. Phulka roti is ready to get roasted. Heat a tawa/skillet on medium flame. Once the tawa is sufficiently hot (check by keeping hand 4-5 inch above tawa and feeling the heat) place the phulka roti on it carefully so that it does not get folded. Roast for 20-30 seconds until small bubbles starts appearing on top side. Once the bubbles starts appearing on roti, flip it on other side. Cook for 30-40 seconds of until the bottom part turns light brown. Now with the help of tong grip the roti on edge and place it on direct flame (remove the tawa while the roti is roasted directly on flame). Switch the gas on high flame and if roti is evenly rolled it will start getting puffed up as shown in below picture. Roast the roti on direct flame just for 5-10 seconds or until it puffs up completely. Flip the roti on other side and roast it on direct flame again for 2-3 seconds. The phulka roti is done. Reduce the gas to medium and take the roti off flame using a pair of tongs. Place the roti on a plate. Repeat the above steps and make remaining phulka rotis. The rolling and roasting of phula rotis can be done simultaneously to reduce the cooking time. It will need extra practice to master this technique, but once you do making roti is a piece of cake.

Smear some homemade ghee (clarified butter) on each roti. You can also smear ghee on one roti and press another roti on top to apply ghee on both simultaneously. This way phulka rotis will be in pairs with layer of ghee in between making it easy while serving & eating. Delicious soft phulka roti is ready to serve. Serve the phulka roti or chappati with any sabzi, dal and steamed rice.