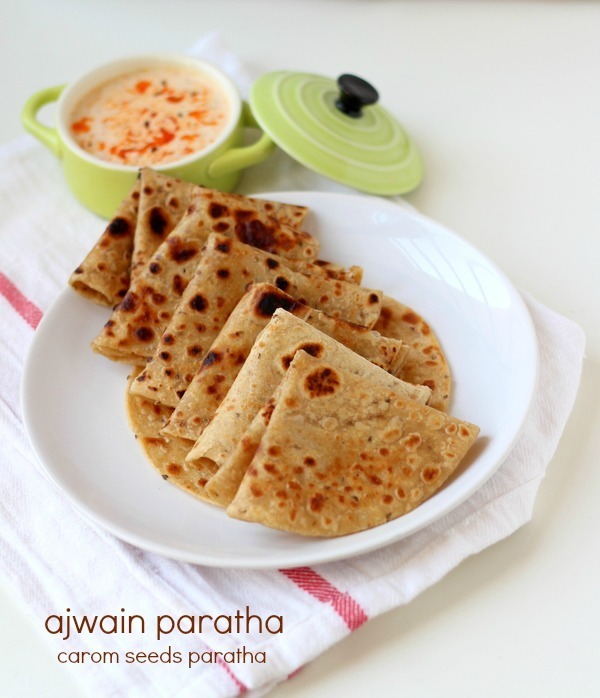 Let me share a simple variation of plain paratha (sada paratha) with a little twist today. Instead of making the plain paratha, I have added a magic ingredient known as Ajwain in the paratha dough. This ajwain paratha recipe is similar to jeera paratha recipe that I shared earlier. Instead of adding cumin seeds I have added carom seeds in the dough. Just one small change of ingredient and the result is totally different.

For this recipe of ajwain paratha, I have rolled the parathas in round shape. However you can roll the parathas in any shape of your choice (triangle, square). As the ajwain is incorporated right inside the paratha dough, it is easy to roll them into different shapes. Instead of making ajwain paratha you can also make ajwain puri and serve it with aloo sabji. The combination is superb.

So we use Ajwain quite often in Indian home. But what is Ajwain seeds? Ajwain or carom seeds also known as bishop’s weed (don’t ask me why :D) are small khaki/brown colored seeds resemble to cumin seeds. The taste and smell of these little seeds differs greatly from cumin. Ajwain’s taste can be compared with thyme but with lot stronger flavor. If you crush a handful of these seeds with your teeth you might find them a bit spicy. Ajwain seeds are good for digestion and hence are used in Indian household since centuries to cure upset stomach. Due to its strong flavor ajwain seeds are used in smaller quantity. Let us get back to the recipe and check the step by step process of making ajwain paratha.

Recipe of Ajwain Paratha with step by step photo

Let us start with the recipe of ajwain flavored paratha. Take the whole wheat flour (gehu ka atta) in a mixing bowl. Pour in 1 tbsp of oil in the wheat flour. By adding oil the dough will become softer and parathas will come out nice. Sprinkle the ajwain or carom seeds in wheat flour. For 1 cup of wheat flour you can add 1 tsp of ajwain seeds. Start pouring the water in wheat flour and mix well into it. Using your hand dip into the flour and knead the dough for paratha. Add water as required while kneading the dough for paratha. Once the dough is ready pound it for a while and keep it aside for resting for 10-15 minutes. Cover the dough with a cloth while it is resting. Let us now roll the parathas. Take a dough ball on rolling board (chakla/paatlo) and flatten it by pressing on top. Start rolling the paratha same as we roll roti/phulka. If the paratha is sticking with rolling board then dust some wheat flour (palothan) and then roll. Roll the parathas so that it has even thickness across its surface. Now to roast the paratha, heat a tawa or griddle and once it is hot place the rolled paratha on it. Once the bubbles starts forming on top, flip the paratha and cook on other side. Apply oil on one side and flip again. Apply oil on either side and roast the ajwain paratha. Roast the ajwain paratha on either side until it gets golden brown in color.

Repeat the above steps and roll and roast remaining ajwain parathas. Ajwain parathas are ready to serve. Serve the ajwain paratha with masala dahi, kakdi raita or mirchi achaar (red chili pickle) and any choice of indian curry.