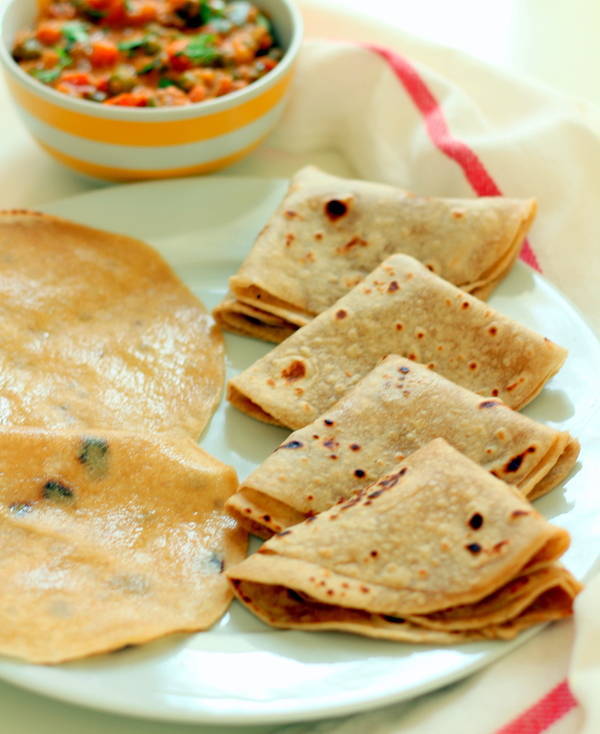 Gujarati Pad Wali Roti Recipe Step by step – Rotis are heart of Indian cuisines if the curries are Soul. Not to forget rice which complements the curries & daals. Rotis or other Indian flat-bread like phulka, chappati, paratha, naan etc are cooked almost daily in any Indian household. Among all the flat-breads the roti / chappati / phulka are considered healthier as they are freshly made from whole wheat flour. And may be that’s why we tend to serve daily meals with roti.

At the same time eating Roti daily can sometimes become cumbersome. Especially when there are kids and husbands (old kids :D) to serve. They get easily bored with the daily routine food and always complains about the stereotype menu. That is the reason one should once a while try and make other variations. One such variation in my home is Pad Wali Roti (literrary means layered Indian flat-bread). Pad means layers in Gujarati.

This pad wali roti is also known as Swaminarayan roti as it is mostly served in the Swaminarayan temple across the country. If you visit the famous Akshardham temple in Delhi and planning to take prasaad then you may find pad wali roti being served. The pad wali roti that I have shown today is simple to make and stays fresh for longer time compared to normal phulkas. That’s because of the ghee or clarified butter being used in generous amount. That’s the reason why pad wali roti is good to carry while travelling or in lunch box too.

Let us check the step by step recipe of Gujarati Pad wali rotli or roti.

Take whole wheat flour (the same that we use to make chappatis or phulkas) into a mixing bowl. I have used Aashirwad atta. In the 1 & 1/2 cup of wheat flour add around 2 teaspoon of salt. You can add salt as per your taste. Gujarati chappatis are normally prepared saltless. However for this layered chappati we do add a little salt. Next pour 1 tablespoon Oil in the flour. After that start kneading the dough by adding little water at a time. This is the same process as we make normal chappati dough. Once the dough is ready keep it aside to rest for 10 minutes.

Divide the whole wheat dough into round lemon size balls. The total number of pad wali roti is half the number of balls as 2 dough balls are required to make this chappati. If you want to make thin rotis then make small dough balls similar to size of puris. Combine both dough puris such as the melted ghee layer and dry whole wheat flour layer touches each other. Press both the doughs together. Place the dough on a rolling board. Sprinkle some dry wheat flour. While rolling apply as little pressure as possible. Otherwise the layers might get fused into each other. Pad wali roti is rolled and ready to be roasted. We can clearly see two layers emerging out of the roti. Once the bubble starts emerging out of one side turn the chappati and roast on other side. Roast like normal chappati until both sides have golden color and are nicely cooked. Pad wali roti or chappati is ready. Take the chappti off flame and tap using hand on top. This way the layers will get easily separated out. Enjoy the pad wali roti or rotli along with any Indian sabzi and daal.