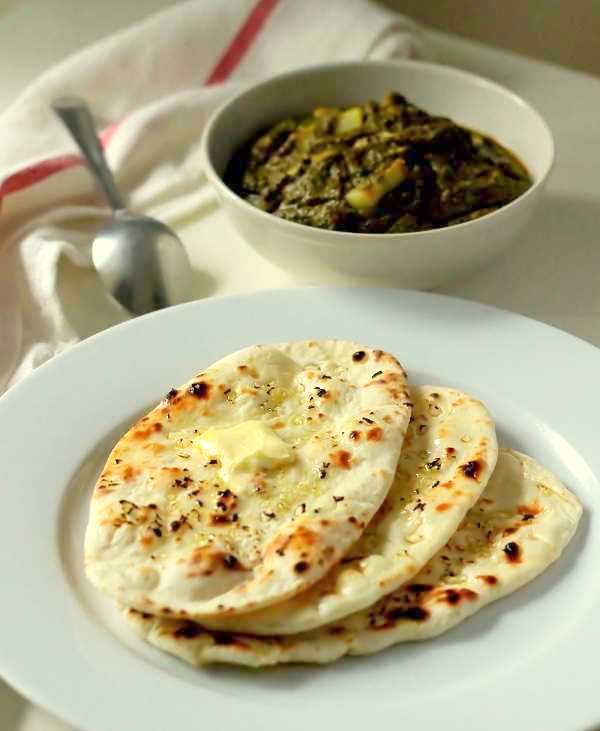 Garlic naan recipe on Tawa – Naan is one of the most ordered Indian bread in an Indian restaurant. Usually this soft tasty Indian bread is cooked in tandoor oven, a hot clay oven used to cook tandoori dishes. Often the temperature reaches to 500 degree in tandoor ovens making it difficult to adopt the naan recipe at home. Lot of people have asked how to make garlic naan on tawa or gas stove. So here is complete recipe of garlic naan cooked on tawa instead of oven.

Garlic naan is my favorite naan. It goes really well with so many punjabi curries. The garlicky flavor of naan compliments the spicy flavor to different Punjabi curries.

Here I have made garlic naan on tawa instead of oven. Not all home kitchens have oven to their disposal. So why not to use gas stove and a tawa to recreate this soft and delicious naan bread. Just try this recipe as I have described here and I am sure you will be surprised how easy it is to make garlic naan at home on gas stove / tawa.

I have used dry yeast to make naan dough fluffy and soft. If you want you can avoid but I would highly recommend using yeast as it makes garlic naan really soft and tasty. The naan dough is usually kneaded in milk instead of water. That also adds into the softness of naan. I have also added some yogurt / curd to enhance the flavor. I have served the garlic naan with home made aloo palak curry. This soft and light garlic naan goes really well with any Punjabi gravy based curry. Serve it hot as soon as it comes out of tawa.

Let us check the recipe of garlic naan on tawa.

In a bowl take 1/3rd cup of lukewarm water and add dry yeast. Add a 1/2 tablespoon of sugar and salt to warm water and stir well until yeast dissolves completely. Keep aside the yeast mixture for 5 minutes until yeast gets activated. In a large bowl take all purpose flour (maida) and add a tablespoon of yogurt. If you have curd whisk it gently before adding. Add milk.

Pour in the yeast mixture in all purpose floor (maida). Knead the maida in smooth and soft naan dough using a spoon or by hand. While kneading add more milk if required. Knead into smooth and soft dough. Cover the dough using moist kitchen towel and keep aside for 1 to 1.5 hour. Keep in a warm place. The dough should get roughly double in size once rested properly. The naan dough is ready and increased in size. Divide the soft naan dough into 5 to 6 small round dumplings. Keep aside for 5 to 10 minutes. Dust a rolling board using some flour and take one naan ball. Press gently and apply some flour on it. Peel off the garlic and finely chop. Spread the finely chopped garlic on naan and using rolling pin press it against the naan.

Turn the naan upside down (garlic side down) and apply water on the other side. Water along with the flour make a sticky glue that will help naan get stuck on hot tawa. This is crucial as we turn tawa upside down and cook naan directly on gas flame.

Take the garlic naan and gently place it on preheated tawa. Apply some pressure using fingers on garlic naan. Cook for 1 minute on high flame. Turn the tawa upside down on gas flame as shown in below photo. We will now cook naan directly on hot gas flame. While the garlic naan is getting cooked on direct flame as shown in below photo, move the tawa so that it is evenly cooked. Do not let garlic naan get burned. Cook till it gets golden brown color.