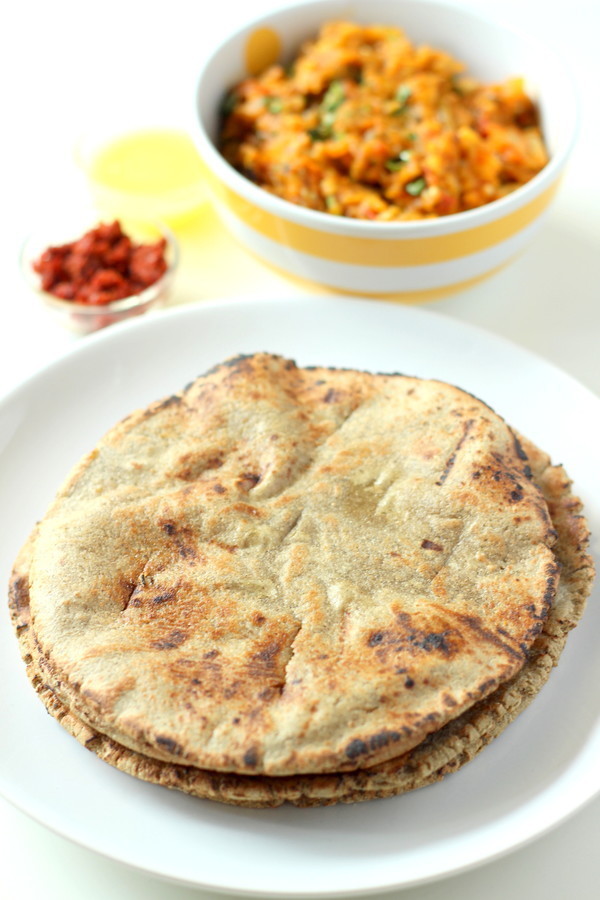 I have waited so long for this recipe. This bajra rotla recipe is my favorite Gujarati comfort food. I had made these rotla quite a while ago but couldn’t share it. Finally today I am sharing these delicious bajra na rotla recipe.

This bajra rotla recipe is best served with baingan bharta. The combination of ringan nu bharthu & bajra no rotlo is just amazing. The bajra and jowar (black & white millet) flour is widely used in states of Gujarat and Rajashthan. The roti made from these flours are quite healthy too. Its different than wheat flour and taste slightly bitter but tasty. The rotis made from these flours were traditionally cooked in small earthen or brick stove called “Chulha”. It takes quite some time but rotla cooked on chulha taste authentic and delicious. However at home it is not possible to make rotla on chulha so now we make it on stove top. The rotla made on griddle taste good too. In few houses still this bajra rotla is made in clay pan / griddle known as “Tavdi”. I haven’t tried bajra rotla on tavdi yet but will definitely try once.

Recipe of Gujarati Bajra Rotla with step by step pictures The bajra rotla dough should be similar to roti dough but slightly harder/grainier. Once the dough is nicely kneaded it should become softer. Take a potion in hand and give it round shape as shown below. Now press the dough between your palms and start giving it flatter round shape. Making bajra rotla with hands calls for some practice. You need to practice for a while to get hold of this technique. Check below video where I am making traditional gujarati bajra rotla using hands.

Make round shape rotla of around 5-6 inch diameter. Cook the bajra rotla for around 30 seconds. Apply some water on top surface so that bajra rotla doesn’t get dry. Flip the rotla on other side and cook for 30-40 seconds. Now take the rotla off the tawa and place it on direct flame. Increase the flame. Let the rotla get puffs up like phulka roti. Delicious bajra rotla is ready. Smear some ghee or clarified butter on rotla and serve it hot along with baingan bharta.