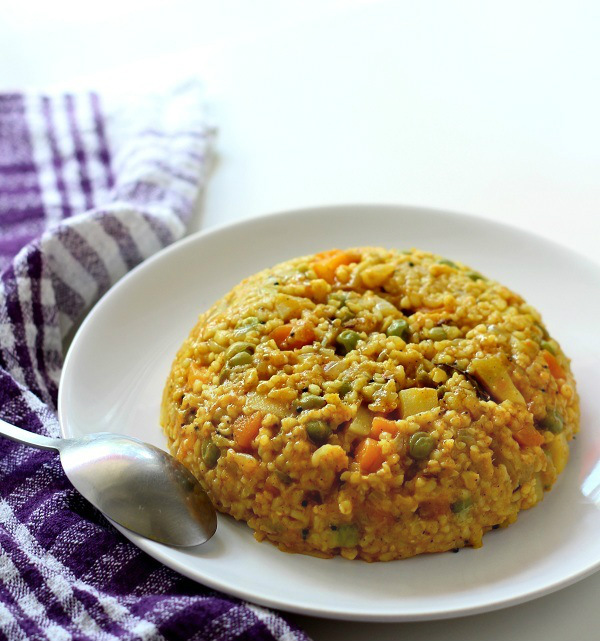 Masala Fada Khichdi (Daliya Khichdi) is one of the khichdi recipe that I often cook at home. Generally khichdi is a rice and lentil dish but here I have used broken wheat (fada) along with yellow moong dal to prepare this dish. Checkout my other recipe of Gujarati khichdi which is a traditional rice and lentil dish.

The broken wheat also known as daliya or fada (Cracked wheat, Dalia, Bulgar, Burghul, Fada, Lapsi, Bulgar Wheat, Couscous) is often used to prepare comfort dishes like daliya lapsi. Its quite nutritional and often prepared during festivals such as navaratri, janmasthami etc. As Broken wheat is made from whole wheat it is quite nutritious and contains fibers and thus often added in healthy diet plans. Compared to rice, broken wheat has much more fiber contain and vitamins and also has a better glycemic index.

This easy masala fada khichdi recipe is a pressure cooker recipe. Usually the broken wheat (fada/daliya) increases the cooking time of dish. So we pressure cook it to reduce overall cooking time.

Here is a quick and easy recipe of masala fada khichdi (daliya khichdi). We will need few vegetables for this masala fada khichdi (daliya khichdi). Potato, carrot, green peas and onion. Wash the potato and peel off the skin and cut into pieces. Also chop the onion and carrot as shown in below photo. I have used frozen green peas but you can use fresh as well. Also finely chop green chilies, ginger and garlic. That’s it. Feel free to add other ingredients of your choice like boiled corn kernels, mushrooms etc. Throw in the chopped green chilies, ginger and garlic and saute them for a minute.

Once the rawness of garlic / ginger goes away add chopped onions. Mix well and let the onion get saute for a minute till it becomes translucent.

Add water and stir well all the ingredients. Also add some salt to taste. After than add soaked yellow mung dal and broken wheat (fada / daliya).