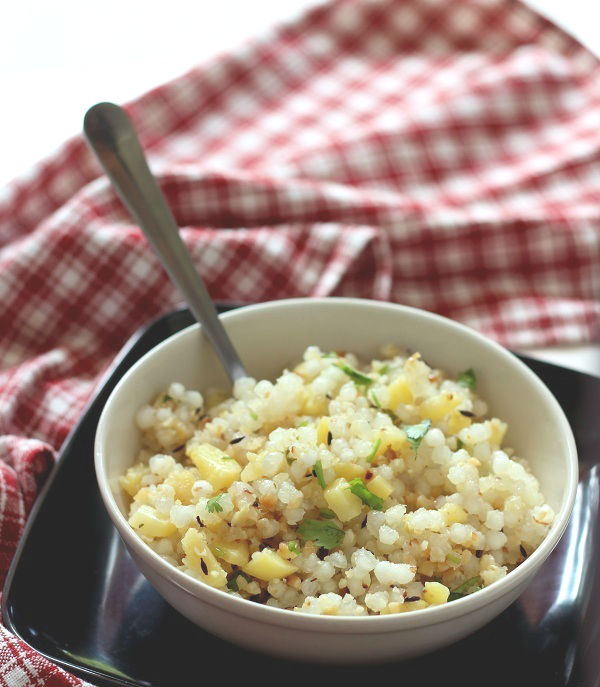 One such ingredient is Tapioca sago or commonly known in Indian subcontinent as Sabudana. The sabudana khichdi also known as vrat ki khichdi is cooked using tapioca pearl with potato and peanuts. This dish is generally prepared during festival season like navaratri, ekadashi, poornima, ramnavmi etc when wheat based dishes are willingly abstinence. The sago is rich in starch forms the healthy base of this nutritious dish.

Sabudana is a must have ingredient in your kitchen if you are vegetarian. You can make lots of dishes using this simple yet nutritious ingredient. Other recipes like sabudana kheer, sabudana vada, sabudana pakora, sabudana bhel etc.

Other ingredients that are often using in different fasting / vrat recipes are potato and peanuts. Here we have added coarsely grounded roasted peanut powder.

I have used coarsley pounded peanut in this recipe but you can also make sabudana khichdi without peanut. Lot of people have peanut allergy so feel free to avoid that ingredient from this recipe.

Also I have not tried but I know people making sabudana khichdi in microwave! I cannot comment until I try it once.

Here is a quick recipe box of sabudana khichdi. Scroll below to see step by step recipe with pictures. Sabudana (Sago) needs to be soaked in water for about 4 hours before making khichdi. So wash the tapioca sago (sabudana) in running water until the starch run outs. And soak it water for 4 hrs in a bowl. Now let us prepare rest of the ingredients. We need coarsely grinded roasted peanut. Roast the peanut on hot pan, peel off the skin and then coarsely grind it in a mixer/grinder. Check farali kadhi recipe to see the step by step photo of roasting peanuts and coarsely grinding them.

Also peel off the skin of potato and cut it into medium size pieces. In maharastrian version of this recipe the potato are boiled and then used. But I like to add the potatoes as is without boiling. Now add diced potato in pan and also finely chopped green chilies and ginger. Mix all the ingredients well and cook for 4-5 minutes until potato get softens. Also add salt to taste. Adding salt speeds up the cooking of potato. Once the potato is cooked nicely, add peanut and sabudana. Also squeeze half lemon juice and add a teaspoon of sugar and mix well. Add salt to taste and mix the khichdi well and cook on low flame for 6-7 minutes.