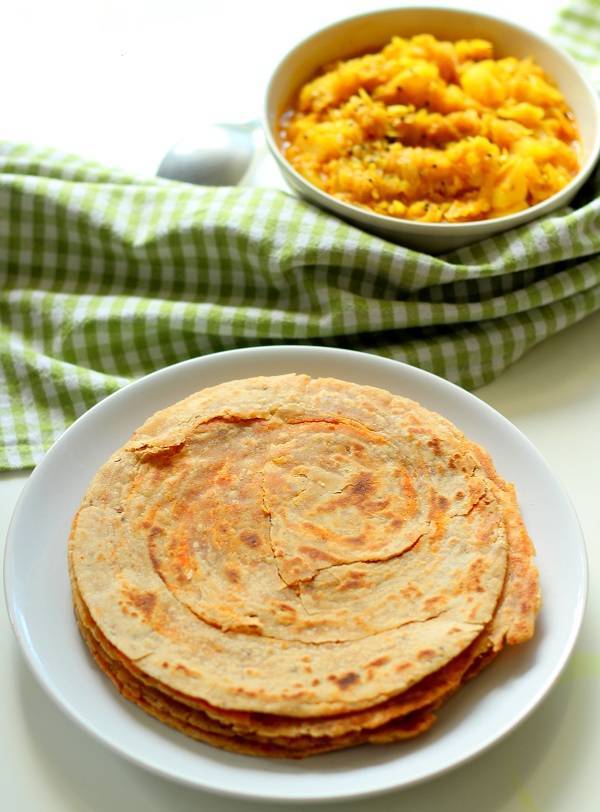 Lacha Roti Recipe or Lachedar Roti is a Punjabi styled layered roti prepared from whole wheat flour without using oil in the roasting. Although the lacha paratha (lachcha paratha) is the well known Indian flat-bread served with  punjabi curries the lachcha roti is similar and a little healthier option. It is prepared just like lacha paratha with one exception. Instead of roasting the paratha in oil or ghee the lacha roti is simply roasted like normal roti on tawa.

Lacha means “layers” in hindi. As you eat the lacha roti it literally separates in different layer. Each layer tastes crispy on exterior side giving away soft roti inside. The taste of this lacha roti goes great with any gravy based curries. You can eat lacha roti with palak panner, aloo palak, corn palak, paneer masala, etc

This is a nice break-the-routine recipe when you are tired of eating / serving simple Indian rotis / phulkas. I am sure kids would love to have this delicious and eye catching lacha roti in their plate.

We have used whole wheat flour in preparing the lacha roti and also used minimum required oil. Thus this recipe is healthier compared to lacha paratha. Lacha roti is easy to prepare if you are used to make rotis in your regular diet. And you might struggle a little if you are trying you hand for first time on any Indian flat-bread recipes. So without further ado let us start with step by step recipe of lacha roti (or lachedar roti) with pictures.

Step by step recipe of Punjabi Lacha Roti with images

For this lacha roti we will use normal wheat flour that we use everyday to prepare roti. The dough is similar to normal roti with a small variation. I have added Ajwain (Carom seeds) in the dough. Ajwain helps in digestion making it easy to digest the lacha roti. Plus it adds a unique flavor to this roti. Also add some oil in the wheat flour. This way the dough will become soft and smooth. Finally add water in small quantities and knead a smooth dough by hand.

The dough for lachcha roti is ready. Keep the dough to rest for around 10 minutes. The filing part of lacha roti is done. We have applied some clarified butter, red chili powder and chaat masala powder. Now let us roll the lacha roti and make the authentic layers called lacha. The lacha roti cone is ready. We will now fold the cone in such a way that it will form layers called lacha. We have finally rolled the roti dough incorporating all the layers (lacha) within along with the butter & red chili, chaat masala stuffing. We are now ready to roll the dough into lacha roti. Roast the roti on hot tawa till it gets nice brown color. Roast on both sides for 1 to 2 minutes till nice golden brown color. Lacha roti is ready to serve. Delicious mouth watering lacha roti is ready. While serving lacha roti squash them between two palms so that the layers gets separated. Serve lacha roti with any gravy based vegetable or panner recipes. If you are looking for more Indian bread recipes do check the recipe of garlic naan, gujarati puran puri.