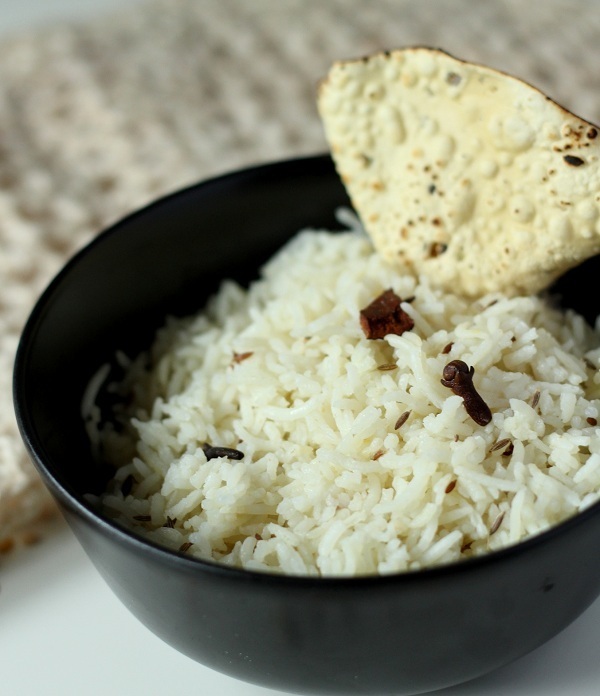 Jeera Rice Recipe –  Yes, you heard it right: “Jeera Rice”. Its one of the simplest, easiest yet most ordered rice dish in an Indian restaurant. Jeera Rice is very common side dish eaten along with different lentil preparations like dal fry, dal palak, mix dal fry, dal tadka or even south indian rasam and sambar. I have seen Jeera rice served as complimentary dish along with curries in an Indian restaurant.

The way I make the Jeera rice is the common recipe for this dish. I have tempered the Jeera (cumin seeds) in clarified butter (ghee) and then added this tempered ghee on to rice & water. Alternatively you can take a deep pan, add clarified butter and temper some cumin seeds in the pan. Once tempered, add the rinsed rice and mix it well. Then pour water and boil it rice.

Whatever recipe format you use, the end result is almost similar. Lot of people also use a Rice cooker to make Jeera rice. Instead of boiling the rice in a deep pan, just pour rice+water in rice cooker and let it cook. I have also seen recipes where people cook their Jeera rice in Microwave!. That’s perfectly normal if you are used to cook rice in microwave. The idea is to mix the rice with tempered ghee and jeera. That adds flavor to rice.

Jeera rice as I mentioned earlier, is quite popular in Indian restaurant. As it is best side dish for any gravy based sabzi it is often the last dish being ordered in restaurants.

Basmati rice is the key ingredient in this jeera rice. You will not get that flavor if you use any other form of rice. Basmati means ‘fragrance’ in sanskrit. That fragrance makes what jeera rice is.

If you like Jeera rice, also check my other rice preparations:  lemon rice recipe and mexican fried rice recipe.

Coming back to the easy to cook Jeera Rice Recipe, lets check the steps to make jeera rice at home.

1. Wash the basmati rice and then add 2 cup of waste and keep aside. Add salt and mix well with rice. In the tadka pan add clarified  butter(ghee), cloves, cinnamon stick and jeera and once the jeera is tempered put the tadka  in the soaked rice. Stir it. 2. Once the tadka is added in the soaked rice, place the rice on the flame for about 20 min and let the rice get cooked well. The easy quick jeera rice is ready to serve. I have served this jeera rice with mixed dal fry, you can serve with roti,chapati etc.