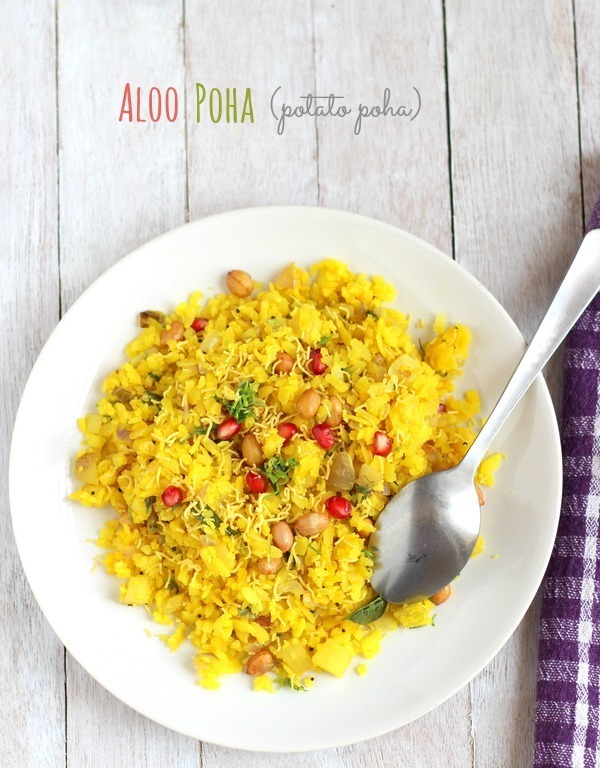 The aloo poha or batata poha is quite well known in Gujarat and Maharashtra. It is known as batata poha where batata is “potato” and poha means “flattened rice”. Although this is a Gujarati version of aloo poha, the maharasthrian poha is usually made with onions. Hence they are called “kanda pohe” where kanda = onions in marathi language. Aloo poha is very popular breakfast dish in both these states and hence available in all local eatery in morning. The canteens in the offices also serve aloo poha in breakfast as well as in evening snacks. In my home we make aloo poha for evening snacks. Usually morning breakfast is bhakri or thepla. On weekends I cook aloo poha for breakfast.

There are so many ways one can prepare poha for breakfast. In this recipe we have used potato as main ingredient. Other recipe we noted earlier is “kanda pohe”. Also you can add varieties of vegetables in poha like green peas, carrots, sweet corns or even eggplant (brinjal). A maharashtrian version is popular known as “vangi pohe” = “eggplant poha”.

Note: Using the two ingredients potato and poha you can even make aloo poha cutlet or tikki.

Although poha is made by flattening rice, they do have few health benefits. Poha are lactose-free so people who are lactose intolerant can enjoy this dish. Also it is fat-free and good for heart. Poha is good source of 11 essential vitamins and minerals including iron. The way poha is prepared by pounding rice in iron mortal pestle boost the iron content in poha.

I have also shared the video recipe of batata poha or aloo poha on youtube. Have a look 🙂

While making gujarati batata poha we can keep a few tips in mind to make authentic poha every time. Getting back to the recipe let us check step by step recipe of gujarati batata poha with pictures.

To make delicious aloo poha for breakfast we need these ingredients. Beaten rice or poha, potato, onion, green chilies, peanuts, curry leaves, lemon, oil, mustard seeds, sugar, salt and freshly chopped coriander leaves. To garnish the aloo poha we will use some fried sev (fried chick-pea flour vermicelli), pomegranate seeds and coriander. The exact quantities of all the ingredients are shown in the recipe box at the end of this post. Let us first rinse the poha in water. For this take the poha in a strainer and rinse it thoroughly in running water atleast for 2-3 times. Do not press the poha as they might get mushy. Once cleaned, strain the excess water from poha. Keep it in strainer atleast for 5 minutes so that all the moisture is strained out. Now add haldi (turmeric powder) in soaked poha. Add sugar in the poha. Add salt per the quantity of poha. Squeeze half a lemon juice in soaked poha. We just soaked the poha in water and then added turmeric powder, salt and sugar in it. Keep it aside for sometime while we start cooking potato and onion. Heat oil in a non-stick pan or kadhai and once it is hot add peanuts (shingdana). You can also dry roast the peanuts if you want. Once roasted take the peanuts out and keep aside. Leave the oil in pan. Saute curry leaves just for few seconds and then add potato cut into cubes. Mix and cook the potatoes for 2-3 minutes. Add finely chopped onions and again saute them for 3-4 minutes. Add salt for onion and potato only. We already added salt to poha so add a little less salt in this step. Mix and let onion and potato get saute for 3-4 minutes. Mix well all the ingredients. Cover the kadhai with lid and let the aloo poha gets cooked for 3-4 minutes until the potatoes are nicely cooked. Remove the lid and check if potaotes are done. Aloo poha is ready. Garnish the aloo poha or batata poha with fresh coriander leaves, pomegranate seeds and some fried sev. Serve aloo poha in breakfast along with a cup of tea.