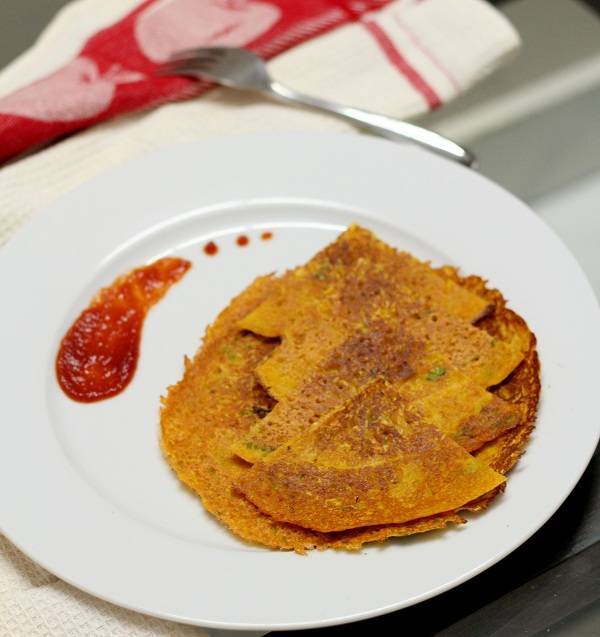 Besan cheela recipe with step by step photos – Besan cheela also known as besan dosa or vegetarian omelet is a quick Indian breakfast recipe that we all love. This quick fix break fast dish gets ready in no time and is quiet appetizing too. Often we wake up with a confuse thought of what to have in breakfast. Well here is a dish that you can cook for breakfast in no time. Also besan cheela can be served as evening snacks for hungry school return kids or office return husbands 🙂

There are so many different variations of this simple dish. You can add almost anything in the besan cheela batter and make all sorts of cheelas. I sometimes make vegetable cheelas, methi cheelas, corn cheelas, cauliflower cheela, cheese besan cheelas etc. Depending on what is available in refrigerator at time of making you can improvise. Also try adding grated carrot to besan cheelas. It taste yum. Don’t worry about the calories 🙂 Breakfast like a king ^_^

Today let us stick to the basic besan cheela recipe that is made from gram flour, onion, green chili, ginger garlic and usual Indian spices. Let us go through step by step recipe of besan cheela.

Step by step recipe of besan cheela for breakfast or snacks Tasty besan cheela or vegetarian omlet is ready. Serve the cheela hot as they does not taste good when cold. You can serve besan cheela with coriander chutney, tomato ketchup, coconut chutney, achaar etc. Below is the recipe box to quickly glance the ingredients & steps. Also you can increase or decrease the serving depending for how many people you planning to make besan cheela for.