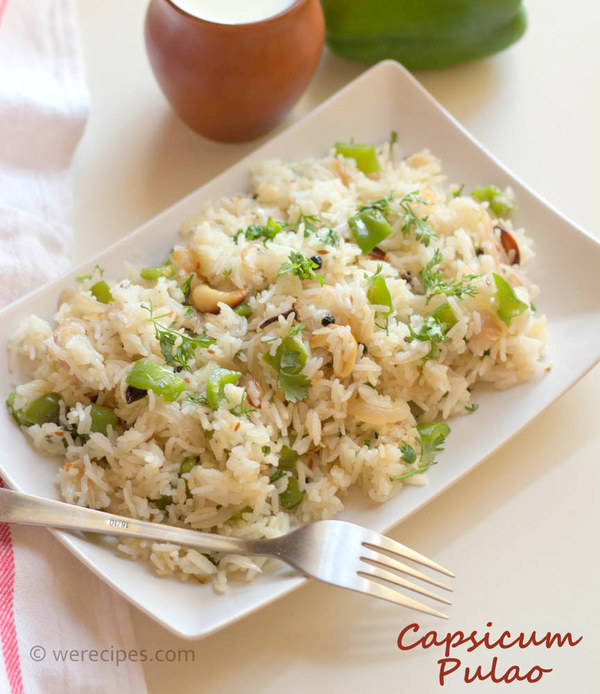 Capsicum pulao recipe or pulav recipe – So what are the two most popular rice dishes that you often serve in an Indian wedding or occasion? Ofcourse its Pulao or pulav and Biryani. Both these rice based dishes are loved among Indians. Pulao are famous in northern states of India while biryanis from Hyderabad are world renowned. Non-veg Biryanis are popular, but their vegetarian counterparts are also served during occasions. While the recipe of biriyani is considered lengthy compared to pulao both taste quite well. To make pulao, rice is first boiled along with indian spices to give it nice aromatic fragrance that is a signature of good pulao. There are different ways of making pulav. Some people boil the vegetables along with rice while others temper the spices first and later add vegetable in boiled rice. Whatever way you adopt, the final result will be absolutely delightful. While making pulao you can experiment with different spices. You can even add Pav bhaji masala and make Tawa pulao which is a popular Mumbai street food. In this recipe of capsicum pulao we will boil the basmati rice along with cumin, cloves, star anies and pepper corn. This will add unique flavor to pulao giving it authentic fragrance.

When you make any Pulao recipe make sure you use long grain basmati rice. While the normal rice is ok but Basmati rice will give it the perfect taste and texture like restaurant styled jeera rice. First we need to boil the rice for capsicum pulao. For this I have used long grain basmati rice. Rinse the basmati rice thoroughly in water till it runs out of starch and soak for about 15-20 mins. In a non-stick pan / kadhai heat oil and temper black pepper corn (kali mirch), cumin seeds (jeera), star anies (chakra phool) and cloves (laung). Once the spices are tempered add rinsed basmati rice. Add water to rice for boiling. For 1 part of basmati rice I have added 2.5 part water for boiling. We don’t want rice to get over cooked and mushy. That’s why we are adding little less water. While it is boiling we can always add more water if needed. Let the rice cooked along with spices. The aroma of all these spices will blend into rice there by lifting its flavor.

Once the rice is boiled turn off the gas and keep it aside till we prepare rest of tempering for capsicum pulao. Basmati rice is boiled along with indian spices. Now let us stir fried vegetables and mix it with rice to make capsicum pulao.

Let us quickly stir fry remaining ingrediets and mix it with boiled basmati rice and spices and make capsicum pulao. Heat a tablespoon of oil in a non-stick bottom pan and once it is hot add cashew nuts. Shallow fry the cashew nuts for a minute and take them out. We will use these cashew nuts for garnishing the pulao. And we don’t want them to be over cooked. Now in the same pan add sliced onions. Saute the onions for 1 minute. Do not over cook the onions as we do not want them to be brown. Also throw in the chopped green chilies. If you are making this pulao for kids then you can avoid adding green chilies or add as per your taste. Add capsicum or bell pepper cubes now. Give a quick stir and let the capsicum gets cooked not more then 1 minute. We need them to be a little crunchy so let them be a bit under cooked. Add salt as per your taste. As we did not added salt while boiling the rice make sure you add salt for rice also.

Give all the ingredients a quick stir. Mix everything well using two spoons carefully without crushing rice. Using a fork you can separate each grain of rice to give it authentic pulao look.