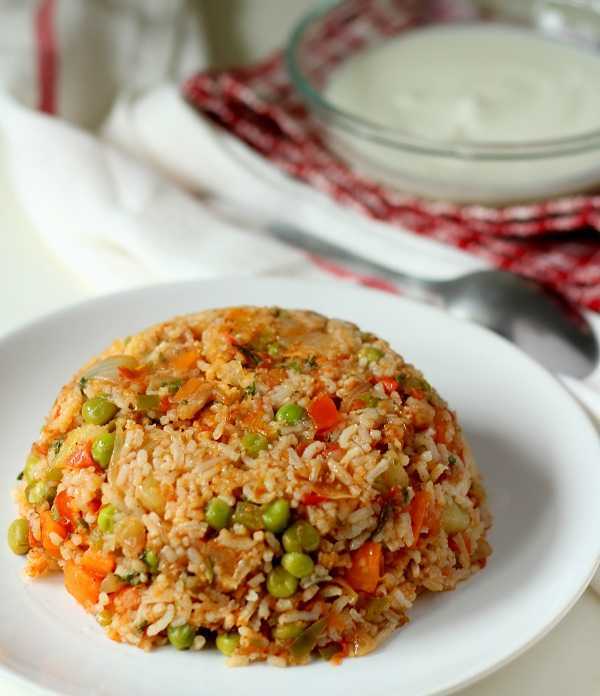 Tawa Pulao Recipe (tava pulav): So you love Pav bhaji but are not a great fan of having it with plain-flour (maida) based pav! You can have your bhaji with rice instead. This is how they serve a very well known street food dish called Tawa pulao on streets of Mumbai.

Pulao also known as Pilaf, Pulav, Pilav, Plov etc is a South Indian rice dish that has so many variations. It is cooked in so many different ways in different parts of world. But in context of India, pulao usually is a rice dish tempered with seasonal Indian spices such as cloves, cinnamon, bay leaf etc and occasionally cooked with meat or vegetables. In India there are varieties of way a pulao is prepared. Some well know basmati rice based pulao recipes are plain pulao, matar pulao, gobi pulao, etc.

One of the variation which is famous in streets of Mumbai is Tawa pulao. Tawa pulao is made on same big flat tawa on roadside along with the favorite Indian street food pav bhaji. Tawa pulao is basically boiled basmati rice mixed with pav bhaji masala and some vegetables. This rice dish has unique flavor all thanks to generous amount of pav bhaji masala being used in it. Tawa pulao recipe that we are making here is the home version of popular streen food. Often the street food tastes great as it is cooked on high flame making it crispier rather soggy. Cooking dish like this on low heated pan often make it mussy. So do as the romans do 😀 I mean do as the street food vendors do. Cook the tawa pulao on maximum hot tawa to bring out that nice flavor. At the same time be extra cautious as it might be burned. So give it a stir every now and than.

Before we see the recipe of tawa pulao lets check few tips and tricks which will make your home made tawa pulao really stand out. We will use basmati rice for this recipe of tawa pulao since the long grains of basmati really enhances the flavor of pulao. Rinse the basmati rice and par-boil them in a deep bottom pan. While boiling you can add a tsp of oil in rice to separate them evenly. We don’t have to over cook the rice. Cook only till they are semi-boiled. Once boiled strain the excess water in a strainer and keep aside. Along side boil potato, green peas and carrot. We do not want them to be over cooked. Just boil them till they have slight raw side (Al dante). Once the potatoes are boiled, let them cool and peel off the skin carefully without burning your hands 🙂 Now lets begin the cooking process. In a tawa or flat non-stick pan heat a tablespoon of butter. This recipe taste great if cooked in butter. So please use it instead of oil. Once the butter melts add sliced onions and saute them till they become translucent. Now add grated ginger and garlic to the onions and saute them till the raw flavor is gone. Throw in the chopped tomaotes along with some finely chopped green coriander leaves (cilantro). Some of the coriander leaves will be keep aside for garnishing. The flavor of coriander cooked in tomatoes really enhances the tawa pulao. Cook until the tomatoes are nice and soft. Let the onion tomatoes get cooked until tomatoes are soft. Once the vegetables nicely blends with tawa pulao gravy add the dry spices. In this case we are using only 1 dry spice; the pav bhaji masala. Pav bhaji masala gives the distinct aroma & taste to tawa pulao. Also season it with some salt. Add a little water (2 – 3 tbsp) and cook until all the spices blends well with tawa pulav masala. Finally complete the recipe by adding boiled rice and some chopped coriander leaves (cilantro). Mix well the tawa pulao using two spoons so that rice is evenly covered with the gravy.

Let the tawa pulao get cooked on tawa (pan) for 1-2 minute on high flame. Occasionally stir the pulav to avoid getting it stuck to pan.