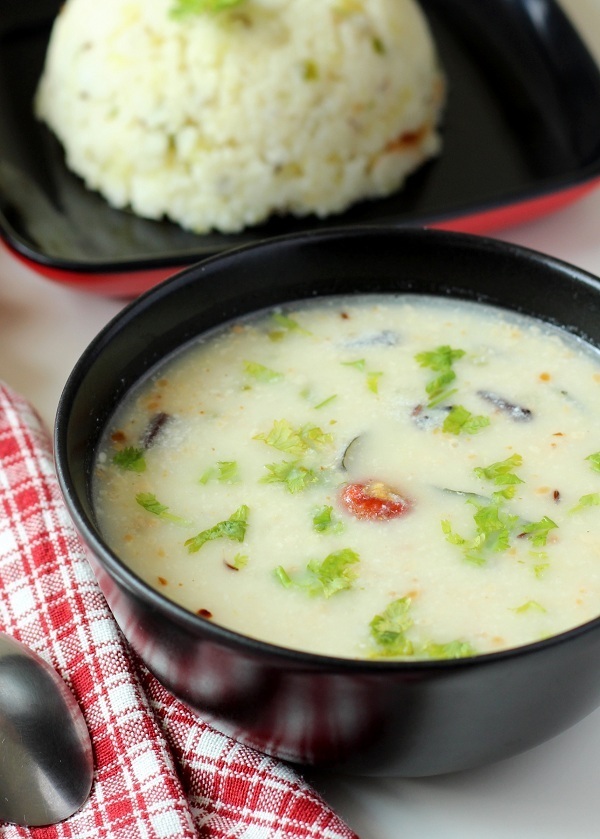 Farali Kadhi (Vrat ki Kadhi): Here is a quick and easy version of Kadhi that can be served for fasts. Fasting also known as Vrat has many health benefits. Once a while cleansing the body by fasting is a natural way of de-toxicating and helps in improving several bodily functions.

The idea is to avoid heavy gluten rich food so that digestive system gets boost. Whatever be your reason to fasting, religious or health, fasting always helps improving once mental and physical health.

During religious festivals like navaratri, ram navmi, ekadashi etc lot of Indian families practice the traditional form of fasting where they consume only some of food items and fruits. There are several Indian recipes for fasting. One of my favorite Gujarati dish that I often prepare during fast is Farali kadhi (Vrat ki kadhi) and farali moriya khichdi (vrat ki khichdi). Not only during the fasting days but I love the taste of these dishes so much that I also prepare them on regular days. Sometime I also make Sabudana khichdi along with the farali kadhi.

For this easy and simple farali kadhi I am using very basic ingredients that are readily available. Potato, peanut and yogurt with some Indian spices.

Let us check the step by step recipe of Farali kadhi or vrat ki kadhi.

Dry roast the peanuts in a pan. Once the peanuts are roasted they gives nice aroma. You can also use ready made roasted peanuts that are available in market. Once roasted, peal off the skin and let it cool down. You can easily peel off the skin but taking few peanuts in hand and rub against your palm. Now put the roasted peanuts in a mixer grinder and roughly grind them. Do not make fine powder we just want coarsely ground peanuts.

In a bowl take yogurt and whisk it thoroughly. Make sure all the lumps are removed and smooth curd water is made. Once the cumin seeds crackles add chopped ginger and green chilies. Let the ginger gets cooked in hot oil for some time. Now just pour the curd, boiled potato and peanut mixture that we prepared earlier in this tempered spices. Mix everything well and cook the farali kadhi for some time. Also add salt to taste. Let the kadhi comes to boil. Cook the farali kadhi for 7 to 8 minutes while stirring  it occasionally.