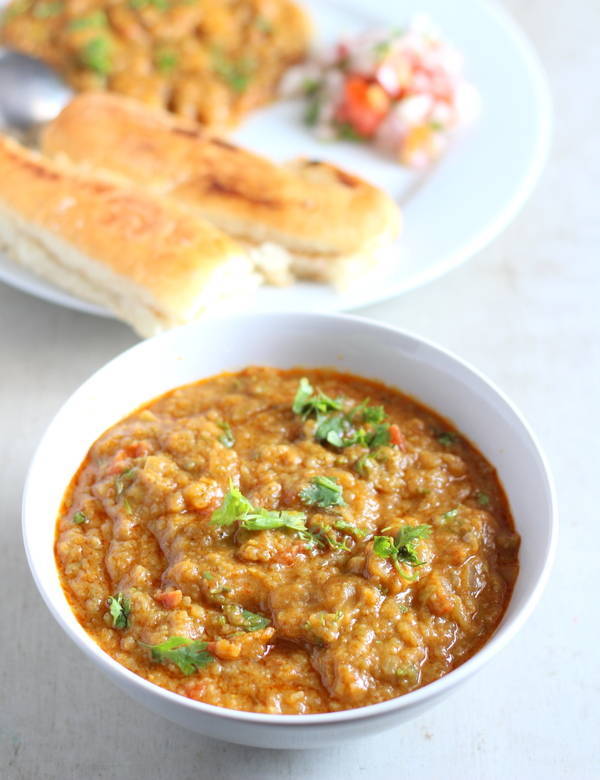 Delicious Mumbai street food style pav bhaji recipe with step by step photos – Like many Indian street food recipes, pav bhaji has its origin in mumbai the city that never sleeps 🙂 The history of dish is worth noting here. The origin of pav bhaji is a fascinating story of mumbai’s textile mill workers who did not got enough lunch break for their meal. According to this deccan harald article : The origin of this dish is traced to the rise of the textile mills in Mumbai. The impoverished mill workers preferred to have a cheap light lunch during their short lunch break, so a vendor created this innovative dish. Initially, it remained the food of the mill workers. With time the dish found its way into restaurants and spread over Central Mumbai and other parts of the city. Then there was no looking back. Pav bhaji is now available in almost all Indian restaurant menu across the globe.

The original mumbai textile mill workers dish is now transformed in a popular Indian street food. There are so many different varieties of this dish made these days. The popular ones are cheese pav bhaji, paneer pav bhaji, mushroom pav bhaji and khada pav bhaji. The plain old pav bhaji with butter is the most loved one.

Pav bhaji has many variations and ways of making. Everyone have their own way of making pav bhaji. A lot of different kind of vegetables goes in this dish. The base of pav bhaji must be potato. On that you can use vegetables like green peas, lauki, baingan, etc. A lot of people add cauliflower to pav bhaji. I like to replace it with cabbage. As we noted the base of pav bhaji must be potato. Instead of potato you can also use green/raw banana. A Jain version of pav bhaji has raw banana instead of potato and also no onion no garlic.

I have used oil in this recipe of pav bhaji. A lot of people uses amul butter to make this dish. Although that taste amazing, the oil is also good. I have had both normal pav bhaji and butter pav bhaji. Use whatever ingredient pleases you. Also you can make this pav bhaji recipe a vegan recipe by replacing butter with oil. Pav bhaji taste amazing when made in bulk. My mom make perfect pav bhaji. Everyone in my home loves her pav bhaji. The secret that she shared with me was that she always made pav bhaji in bulk. And on top she used to cook it for quite long time. That way all the spices used to blend properly in bhaji. Also she never served pav bhaji right after it was done. Always make pav bhaji atleast 1/2 hour before serving. That way it taste really great.

Getting back to the humble mumbai style pav bhaji recipe, let us check the steps of making pav bhaji at home.

Recipe of Pav Bhaji with step by step pictures Also chop the onions and tomatoes for the gravy. Boil all the vegetables in pressure cooker for atleast 7-8 minutes so that they become mushy. Using a smasher smash the vegetables to make smooth paste. Mesh all the boiled vegetables as shown here. Now in a kadhai heat oil. Once the oil is hot add hing (asafoetida). Add chopped tomatoes and saute for another 1-2 minutes until tomato becomes soft. Now add dry spices like coriander powder, red chili powder and ginger green chili paste. I have use red chili and garlic paste. Instead of that you can use only garlic paste. Add a little water if pav bhaji becomes too thick and cook for 4-5 minutes. Delicious bhaji for pav bhaji is ready to serve. Garnish the bhaji with dollop of amul butter, freshly chopped coriander and serve bhaji along with pav or bread.