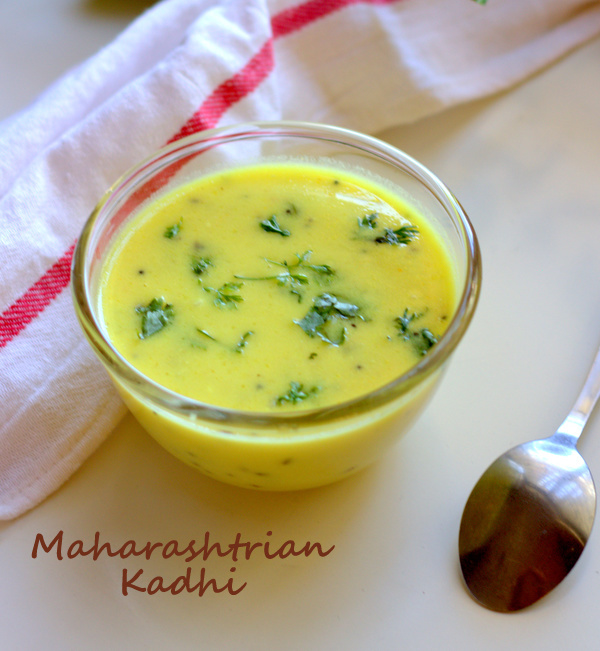 Maharashtrian Kadhi Recipe – Kadhi is the famous Indian dish made from yogurt or butter milk and gram flour / besan. There are so many varieties of this simple dish. People across India cook this dish in different ways. For example there is a gujarati kadhi version, punjabi kadhi, rajasthani kadhi etc. In state of Jharkhand kadhi is also known as Pareh. So the list goes on. Kadhi is served along with fried fritters called pakoras in a dish known as kadhi pakora which is famous in Punjab.

Generally kadhi is prepared using sour curd or yogurt which give its distinct sour taste. The chickpea flour is mixed with yogurt or buttermilk to prepare the base for kadhi. This mixture is then tempered using different Indian spices. However in a variation of kadhi known as Sindhi kadhi (being prepared in traditional Sindhi way) you will see vegetables being added.

Kadhi is considered to be light on stomach and is ease to digest. Hence it is preferred to serve Kadhi in dinner along with khichdi or boiled rice or even jeera rice. Also when kadhi is piping hot some people like to drink it as soup too. Kadhi makes an excellent soup for winter nights.

While making any kadhi one thing you should keep in mind is that always mix besan well into the curd and see that there are no lumps formed. Even after pouring the besan curd mixture  in the tempered spices continuously stir the kadhi till it gets one boil or else the curd will get split. Also one can always use the curd which has become sour in taste to prepare kadhi. In this kadhi recipe I have used home made curd but you can always use the ready to eat curd as well. Let us now check the step by step recipe of maharashtrian kadhi with pictures.

To make this delicious Maharashtrian style kadhi recipe we will need very few ingredients such as yogurt or curd, gram flour (Besan), ginger, garlic, curry leaves and some common Indian spices. I have used home made yogurt to make this kadhi, however you can use ready made yogurt too. Let us first make the kadhi mix by combining yogurt and gram flour. Take yogurt in a bowl and thoroughly whisk it using spoon or whisker. Now add around 1.5 tbsp of gram flour (besan) in 1 cup of yogurt. You can adjust the quantity of gram flour and curd accordingly to 1.5 tbsp : 1 cup ratio respectively.

Mix well the gram flour / besan and curd by whisking gently using a spoon. Make sure that no lumps remain and combine them well. Add water to this mixture and whisk again. For 1 cup yogurt you can add around 2 cups of water. We can also use buttermilk / chaas to make maharashtrian kadhi recipe. Once the ghee melts add cumin seeds and mustard seeds and let them crackles. Saute the ginger and garlic for a minute and then add curry leaves. Let the curry leaves get tempered in ghee for a minute. Then pour in the yogurt gram flour mixture into this tempered spices.

Mix well the kadhi and cook on medium or high flame until it comes to boil. Also add 1 tsp of salt or as per your taste. Mix well all ingredients of maharashtrian kadhi and let it get simmer on low to medium flame. Delicious maharashtrian kadhi is ready. Serve this kadhi hot along with some steamed rice, khichdi, papad and pickle.