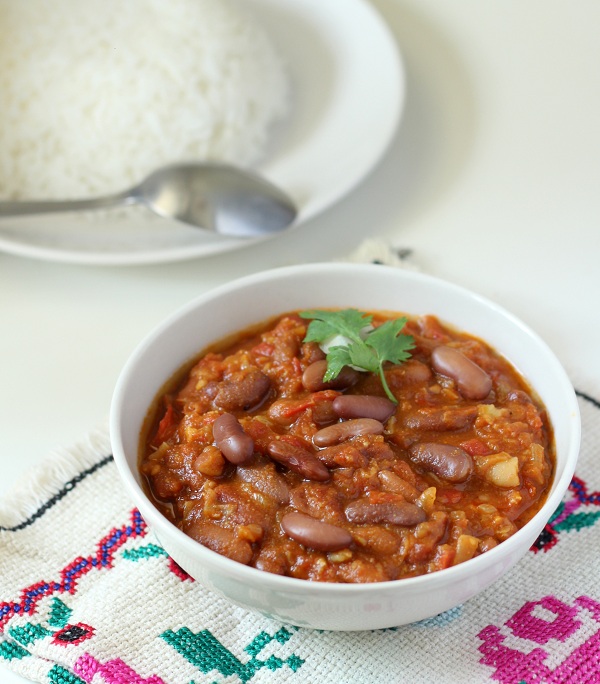 Rajma Masala Sabzi (Red kidney bean curry) – Rajma masala or red kidney bean curry is the famous Punjabi main course dish that is loved across length and breadth of India. You get this sabzi in all the Punjabi dhabas or restaurants. Here is a simpler version of rajma masala that I often cook at home. The gravy for this Rajma masala is normally blended in a mixture grinder/food processor. However I have bypass that step and just made a nice tomato onion gravy by finely chopping them.

The red kidney beans or rajmas are great source of protein. Being vegetarian there are few ingredients which are rich in proteins. So I tend to include lentils, legumes in my diet.  Kidney beans are a very good source of cholesterol-lowering fiber. In addition to lowering cholesterol, kidney beans’ high fiber content prevents blood sugar levels from rising too rapidly after a meal, making these beans an especially good choice for individuals with diabetes, insulin resistance or hypoglycemia.

The rajma masala curry goes really well with plain rice and jeera rice. Hence most of the times they are ordered together as Rajma rice in restaurant. Before we start the step by step recipe of rajma masala sabzi. Let us quickly check some tips that will make your rajma masala taste delicious.

Step by step Recipe of Rajma Masala Curry with photos

Do not throw away the water in which rajma beans were soaked or boiled. We will use the same water in gravy. Wash tomatoes and chop them into small dices. Also finely chop onions as much as you can. We are not going to use grinder / mixture to prepare gravy so we will cut onions and tomatoes as small as possible.

Also mince the garlic and grate the ginger. Throw in the onions and let them get tossed for a minute till they turns golden in color. Once onion turns golden brown in color add minced garlic and grated ginger. Stir well and cook for few seconds so the raw flavor of ginger goes away. Now let us add all powder spices. Add red chili powder, turmeric powder, coriander powder (dhaniya), cumin seeds powder and garam masala powder. Mix well and let the onions get cooked for a minute so that all the flavor of spices blends into our gravy. Add chopped tomatoes. For 1 cup of onion we will add 1 and 1/2 cup of tomatoes. It helps to make the gravy of rajma masala. Mix well the tomatoes and add salt to taste so that they softens quickly.

Cook for a minute on medium flame till tomatoes softens in gravy. Pour in a cup of water (use the water in which rajmas were soaked) into rajma masala gravy and let it simmer for some time. Cook for another 3 to 4 minutes. Then while boiling the rajma just add salt and a pinch of baking soda.
3.2.2885