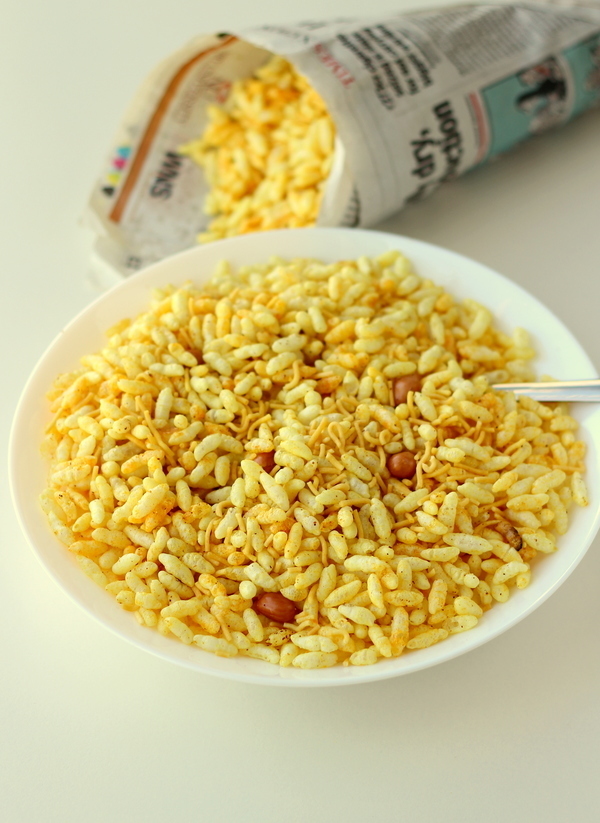 If you love Indian street food then you already adore puffed rice. And if you have not heard about it, no worries.. Puffed rice are a type of puffed grain made from rice. It is usually made by heating rice kernels under high pressure in the presence of stem. So the rice kernel puffs up into this soft and crunchy little treat.

Puffed rice has many names in India. It is known by names such as mamra, murmura, murmure, mumra, mambra, kurmura etc. Puffed rice is key ingredient in bhel puri and chaat. It is also combined with jaggery to make murmure ladoos. You can also make Idli using puffed rice!! I will soon share recipe of idli using murmure 🙂 There are so many different varieties of dishes you can prepare from this one ingredient. I have grown up watching my mom make this spicy puffed rice (we call it vagharela mamra in gujarati) almost every week. Whenever we used to come home from school my mum used to quickly prepare and give us bowl full of these chatpata snack. And now I make them that often too. So let me share few tips and tricks that will help you if you are making masala puffed rice for the first time. I have used fresh puffed rice which are not soggy and thus I am directly tempering in oil. If your puffed rice are little soggy then dry roast them first before this step.

In a thick bottom pan / kadhai, heat oil and add peanuts. On medium flame roast the peanuts until they slightly changes color and turns light brown. Keep on stirring the peanuts. Once the peanuts are roasted transfer in a plate on paper napkin and keep aside. In the same Oil heat some mustard seeds and let it crackle. Now add hing to the oil. Give a quick stir. Keep the flame to low and add the puffed rice. Then add peanut to the puffed rice. Then add sev to the puffed rice.