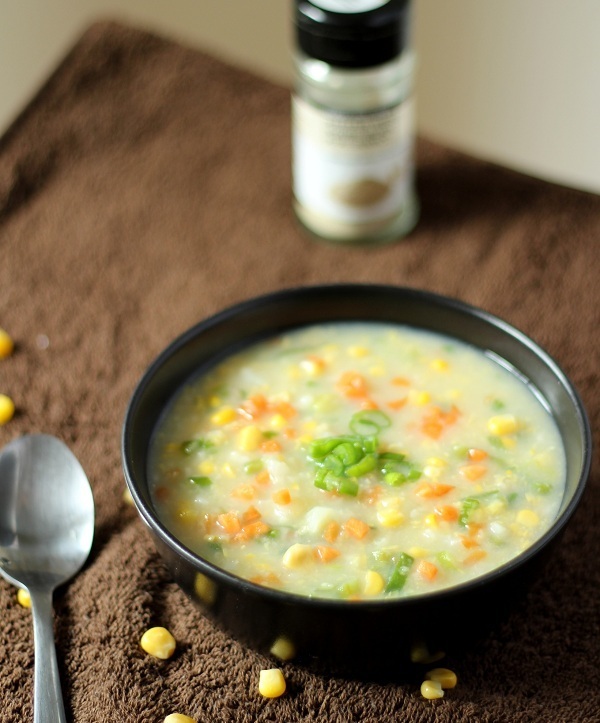 I am still not sure of the origin of sweetcorn soup. The wikipedia page of Maize indicates that the corns were first cultivated in Mexico. The Mayans (one who told the world will end in 2012, but we are still here isn’t it) were the first one to cultivate this crop around 10,000 years ago!

Whatever might be the origin of sweetcorn soup, I am glad they did cos I love this soup. In India people normally go in restaurant and order their soup like “One Sweet Corn Soup, One By Two”! 😀 I love this and say the same way at home also!

This veg sweetcorn soup is healthy and delicious. We have used so many different vegetables in this soup. You can always add different vegetables as per your need and availability. If certain vegges aren’t available in market don’t worry replace it with something else.

1. Finely chop all the vegetables: carrot, green beans, cauliflower and spring onion greens. Make sure you dice the veges as small as possible. You won’t like big piece of vegetables in your soup. 2. Now take some water in a pan and boil the chopped carrot. Carrot takes some time to boil so we started with them first. Let them boil for around a couple of minutes. Now add all remaining chopped vegetables: cauliflower, green beans and spring onion green. Let them nicely cook in the pan. While these vegetables are boiling they make their own vegetable stock. The sweetcorn soup needs some vegetable stock in order to get into right consistency. Here instead of using ready made vegetable stock we are making fresh one using boiling vegetables. 4. Add all seasoning ingredients into our sweetcorn soup: sugar, salt and white pepper powder (optional). Also add chopped spring onion greens into the soup and mix well. Once the soup is boiled, add corn starch paste to thicken the soup.

Sweet corn soup is ready to serve. Garnish it with some chopped carrot and spring onions and serve hot.