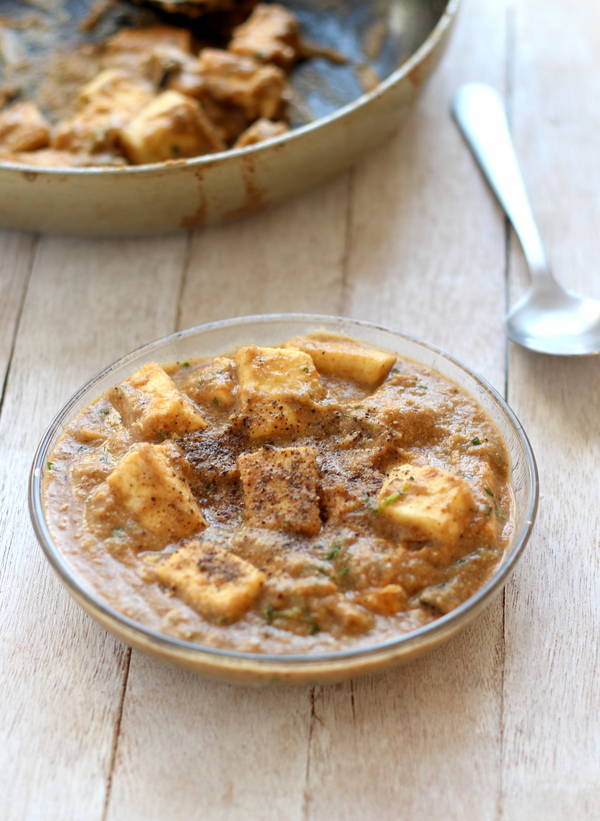 Apologies gulz (and guys) for not sharing recipe since a while now. I have shifted to a new country and since past several weeks I was busy in packing and unpacking. Finally things are settling down and hence got some time to share this recipe. Finally I am sharing recipe of paneer kali mirch sabji which I had made a while ago :D. Without further ado, lets check this delicious creamy cottage cheese cooked in tasty onion & black pepper gravy. Let us now check the step by step recipe of paneer kali mirch with pictures. Then add sliced onions and cook till they turns golden brown in color. Keep stirring so that onion cooks evenly. Once the onion cools down make the puree of onion by grinding it into the smooth paste. In another pan take ghee (clarified butter) and add the dry spices such as cloves (laung), cardamom (elaichi), bay leaves (tej patta), cinnamon stick (dal chini) and cumin seeds (jeera) and cook for about 1/2 min and then add the onion paste into it. Mix well the onion paste and other spices and cook for about 1 min. Now time to add all the Indian spices such as coriander powder, black pepper powder, garam masala and salt to taste. Stir the mixture and cook for about 1-2 min or till the gravy is cooked well. Once the gravy is cooked nicely add curd to the mixture and mix well till the curd incorporate with the gravy. For this recipe, I have used normal curd/yogurt and not sour yogurt. Sour yogurt might spoil the taste so try using plain fresh yogurt. Cook the gravy for about 2-3 min or till the gravy is cooked nicely. Once the gravy is cook if you want you can again sprinkle some black pepper powder. Or else you can also add freshly grounded black peppercons. Now add paneer cubes to the gravy and cook for about 2-3 min. For this recipe, I have shallow fried the paneer before adding. But you can also use fresh paneer without frying. Then crush some kasuri methi between your palm and sprinkle on top of the sabji. Mix well.

Paneer Kali Mirch sabji is ready to serve . You can have it with roti, chappathi, paratha and naan.